According to the oral history of local Indigenous peoples, it is likely that there have been 2 Spirit People in Edmonton since its foundation in 1795. 2 Spirit peoples have been a part of the Nehiyaw (Cree) community for generations before colonization, and it stands to reason that 2 Spirit people would have the same continuity as other Indigenous people in the area. However, it wasn’t until the 21st century that 2 Spirit-oriented groups were founded in Edmonton.

The Aboriginal Two Spirit Working Group (ATSWG) was Edmonton’s first official 2 Spirit group. Created by Dale Ahenakew in 2001 to address local needs, they were successful in co-hosting the International Two Spirit Peoples Gathering in 2002 at the Nakoda Lodge in Morley, Alberta. They were fortunate to find Edward Lavallee, a 2 Spirit Elder, to act as Elder for this Gathering. Today, Ed remains an active Elder for Edmonton 2 Spirits.

In the mid-2000’s, the ATSWG incorporated as the Two Spirit Circle of Edmonton Society (TSCES). It was created by the natural leaders Dale Ahenakew, Ed Lavallee, Roxanne Roan, Warren Winnipeg, and others. During its existence, the TSCES had several projects aimed at building a 2 Spirit presence in and around Edmonton. In February 2003, they co-hosted the first Canadian Forum on Two Spirit Peoples, HIV/AIDS, and Health. The TSCES also worked with local organizations to create a two-week training program in 2004/05, explaining who 2 Spirit people are and how to work with them. Additionally, from 2003-2006 the TSCES held cultural transfer ceremonies to explore historic cultural teachings of 2 Spirit peoples with the help of local Elders. 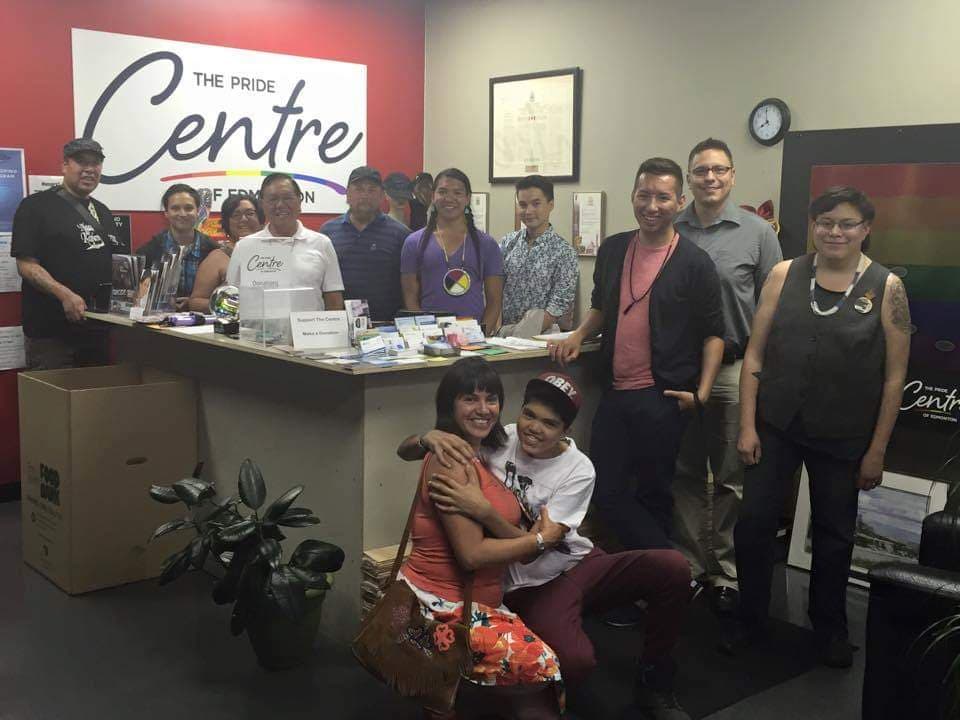 The 2SYEG group began gaining a presence in the LGBTQ2+ community by participating in the annual Pride Parade with their own floats. Their focus was on re-establishing strong cultural practices for 2 Spirit peoples in Edmonton. They also made strides in the social media scene by establishing a Facebook page for the group, 2Spirit YEG.

As Dr. Makokis‘ medical practice became busier and with him and husband Anthony Johnson bringing a 2 Spirit voice to the world in championing Canada’s Amazing Race, this naturally led to James passing the torch to the next leaders stepping forward in the community. This eventually resulted in him stepping down as leader of Edmonton’s 2 Spirit community. Fortunately, Boyd Whiskeyjack stepped up in his place, creating the Edmonton 2 Spirit Society as a follow-up to the 2SYEG and TSCES before it.

On June 8, 2017, the 2 Spirit community was invited to grand marshall the 37th annual Edmonton Pride Parade for the first time since its inception in the 1980s. It was around then that Boyd Whiskeyjack started Knowledge Transfer and began gathering 2 Spirit kin to form the new organization of E2S.

E2S has existed since the 90s and has been reignited by younger generations of 2 Spirits working with the original founders. E2S is an intergenerational organization that serves 2 Spirit and Indigenous queer and trans people, their family members, and community members, to help establish opportunities for 2 Spirits to hold community shaping power.    On April 5, 2018, the Edmonton 2 Spirit Society (E2S) was officially incorporated under the Alberta Societies Act as a non-profit organization and E2S will soon be a registered charity.